A blog by Chicken Wrangler Sara 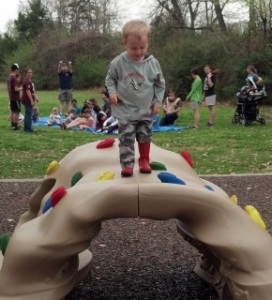 I was recently sitting in a meeting with one of my favorite two-year-olds named Phineas.

(He would be one of my favorites even if he didn’t have such a great name.)

His twin sister Ellen is another favorite of mine.

He was entertaining himself by pulling things out of my purse. He pulled out a collapsible brush I have and asked “What’s this?”

”It’s a brush” I replied and showed him how it worked.

I put it back in my purse and he pulled it out again. “What’s this?”

We did this for a while and on the 439th time he pulled it out and asked what it was I said “It’s a hippopotamus.”

He opened it up and said “It’s a hippopotamus toothbrush.”

And that, my friends, is why I love preschoolers.