According to French writer François Rabelais, “Gestures, in love, are incomparably more attractive, effective, and valuable than words.”

With Valentine’s Day this weekend, I expect romantic gestures will abound. Every year at this time sales of red roses and chocolates will soar. Couples share candlelight dinners.  Expensive jewelry is exchanged. All very romantic things to do to express love for one’s sweetheart.

I’m wondering how whatever gestures of love are made this weekend can conpete with these:

Around 1632 Mughal emperor Shah Jahan built the Taj Mahal—with its elaborate minarets, 250-foot-high domed mausoleum and 42-acre grounds—as a tomb for his third wife, Mumtaz Mahal, who died giving birth to the couple’s 14th child. When he died in 1666, he was buried beside her.

Edward VIII’s Abdication of the Throne 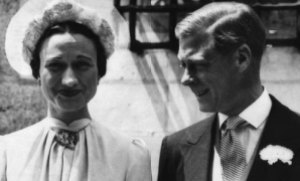 King Edward the VIII became the most romantic English royal of all when he fell in love with American Wallis Simpson. Forced to choose between love and crown, Edward abdicated the throne in December 1936. Simpson quickly divorced her husband to marry Edward the following year. They spent the rest of their lives in retirement in France.

The love between poets Elizabeth Barrett Browning and Robert Browning is one of literature’s greatest romances. In 1850 Elizabeth Barrett’s “Sonnets from the Portuguese,” a series of love poems composed when the pair first began their courtship was published. “Sonnets from the Portuguese” includes the immortal line, “How do I love thee? Let me count the ways.”

Married to Marilyn Monroe for only 274 days in 1954, Joe DiMaggio remained infatuated with the legendary blonde bombshell for the rest of his life sending red roses to her grave in Los Angeles three times a week for the next twenty years.

Over the years, my very romantic husband has given me some incredible wonderful gifts of love.

He’s not built a Taj Mahal, but a lovely home in the forest I dearly love sharing with him.  He  hasn’t abdicated a throne, but if he were royalty, he tells me he would. He has written love poems, and given me Hallmark cards, that equal or surpass Mrs. Browning’s sonnets. And, though I won’t be around, I can see him leaving me flowers. He surprises me frequently with a lovely bouquet,

How about you have you received some awesome romantic gesture(s) of love you’d be willing to share?