Christmas Music – the Customs and Traditions

Christmas Music – the Customs and Traditions 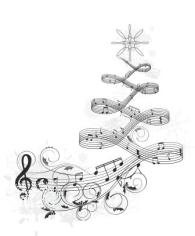 Christian tradition and the liturgical Church calendar recognize the Christmas season from sundown on December 24 (Christmas Eve) through Epiphany of the Lord (January 6). Most of us celebrated the single day, December 25.

Songs of the season are a different story. Christmas music runs non-stop through store speakers beginning after Halloween. Satellite stations and cable networks devote channels to holiday-themed music and shows beginning at Thanksgiving.

For some that’s a good thing. For others, it’s too much. Personally, I’d prefer some Christmas carols and contemporary Christmas songs throughout the year instead of the over saturation.

There was a time before the fourth century when there were no Birth-of-Christ hymns. A songbook with carols only appeared after Christmas was formalized as a feast and fixed to Dec. 25.

In the 13th century, St. Francis of Assisi organized nativity pageants featuring real hay, real animals, and, for the first time, real narrative songs. Christmas singing took on a life of its own, beyond the constraints of the sacred feast. Even drinking songs (much to the church’s horror) contained Yuletide lyrics.

Christmas celebrations and caroling died with the Puritan movement when Cromwell’s Parliament banned any secular observances under threat of fines. The restrictions crossed the Atlantic and settlers of the Massachusetts Bay Colony restricted Christmas caroling and festivities too.

The popularity of Charles Dickens’ A Christmas Carol struck down the grim, Puritan-inflected holiday and led to the 20th century festive, secular tunes. One of the most popular of those songs is “White Christmas,” composed in 1940 by Jewish Irving Berlin, who did not much care for the holiday.

Berlin’s tune, Bing Crosby’s rendition, and the 1954 movie by the same title ushered in carols, songs, and theatrical productions appealing more to the Yuletide mood than to the holiday itself.

Others holiday songs like  “Rudolph, the Red-Nosed Reindeer,” “Rockin’ Around the Christmas Tree,” and “Have a Holly, Jolly Christmas” followed. New versions of these old songs, secular and traditional, quickly emerged.

Whether we want to or not, we find ourselves humming or singing along with the old-fashioned melodies.

One of our family Christmas traditions was to gather around the piano and sing carols from the church hymnal.  A tradition that now includes other instruments.

Christmas music listeners might distinguish between sacred songs (those with lyrics about Christ’s birth) and secular ones (Santa Claus, snowmen, mistletoe, elves, etc.) If you go wassailing or caroling, you make conscious choices on what to sing.

Whatever lyrics you choose, Christmas music anchors us in the past —before Shakespeare and Beowulf and all the eras in between—and fills us with the spirit of Christmas.