The designation of October as National Breast Cancer Awareness Month (NBCAM) began in 1985 as a partnership between the American Cancer Society and the pharmaceutical division of Imperial Chemical Industries, maker of several anti-breast cancer drugs. 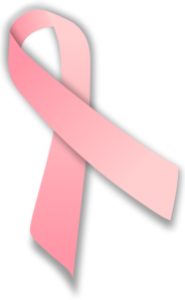 The pink ribbon has been the international symbol of breast cancer awareness since 1992.

Due in large part to NBCAM and the pink ribbon campaign, two things have happened in recent years:

~a gradual reduction in female breast cancer among women aged 50 and older has been recorded.

~a decline in death rates from breast cancer

Still there are myths about breast cancer that persist. Below are seven such myths and facts to debunk those myths

FACT: Only a small percentage of breast lumps turn out to be cancer.

FACT: Each year approximately 2,190 men will be diagnosed with breast cancer and 410 will die.

FACT: A mammogram is the current gold standard for the early detection of breast cancer.

FACT: Breast cancer is the result of uncontrolled cell growth of mutated cells that begin to spread into other tissues within the breast.

FACT: Researchers at the National Cancer Institute (NCI) are not aware of any conclusive evidence linking the use of underarm antiperspirants or deodorants and breast cancer.

This website uses cookies to improve your experience while you navigate through the website. Out of these, the cookies that are categorized as necessary are stored on your browser as they are essential for the working of basic functionalities of the website. We also use third-party cookies that help us analyze and understand how you use this website. These cookies will be stored in your browser only with your consent. You also have the option to opt-out of these cookies. But opting out of some of these cookies may affect your browsing experience.
Necessary Always Enabled
Necessary cookies are absolutely essential for the website to function properly. This category only includes cookies that ensures basic functionalities and security features of the website. These cookies do not store any personal information.
Non-necessary
Any cookies that may not be particularly necessary for the website to function and is used specifically to collect user personal data via analytics, ads, other embedded contents are termed as non-necessary cookies. It is mandatory to procure user consent prior to running these cookies on your website.
SAVE & ACCEPT
Go to Top