It all started with this simple question:  Do your chickens eat bread?

A friend was helping at a food distribution event and had a lot of bread left over. She did not want to throw it in the dumpster so she asked if we could feed it to the chickens.  We figured bread is made of grain and chickens eat grain so chickens must eat bread.

My husband went and picked up what turned out to be several boxes of very nice bread – sour dough, cranberry, whole wheat and many others.  Most of it was in fine condition – much too good to feed to chickens so we pulled out the good loaves and started calling friends to see if they wanted any.

That was several years ago. Now every Friday I go and help my friend with this food distribution that has turned out to be more than just bread. In fact it is like Christmas when the truck opens the door.  We’re never quite sure what we will find. There have been cases of bananas, avocadoes, beets, turnips, and bags of onions, carrots, grapefruit, and oranges.

We have started calling whatever is in abundance the “secret ingredient”.  Some people make a game out of seeing how many ways they can fix whatever we get in abundance.

One week recently there was spaghetti squash.  Most people did not know how to fix it so as I handed it out, I explained what to do with it.  There was still a lot left over which I brought home and gave to any of our friends and neighbors who wanted it.  I even had people I didn’t know who heard we had a truck load of squash and came to get some.  It is an interesting way to meet people to say the least.

Last week’s “secret ingredient” was apples.  They came in a large (the size of cardboard box that stores put watermelons in) wooden crate. 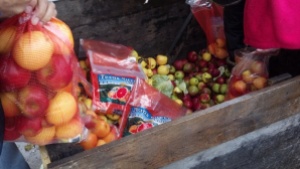 We put them in bags which seems simple enough.  Except it was raining and cold.  We bagged apples until our hands were numb. What was leftover after the distribution I loaded as much as I could fit into the back of my truck along with the leftover bread, cabbage, grapefruit, and bananas. When I got home I covered the back of the truck with a tarp and went inside to thaw out.

When my son got home from school, he said, “Mom I need to make an apple cobbler.” He was totally unaware of what I had in the truck.

I smiled and said, “I just happen to have some apples.”

Matt made cobbler, Brian made apple butter, and I made apple pie, baked apples and dried apples. This was after giving apples to everyone we know.

Now we are ready for this weeks “secret ingredient.”